This section describes the high-level architecture of Cardano. It provides details on the core components and their interactions, and briefly discusses Cardano’s eras and implementations.

The following diagram outlines the interaction between the system components of Cardano: 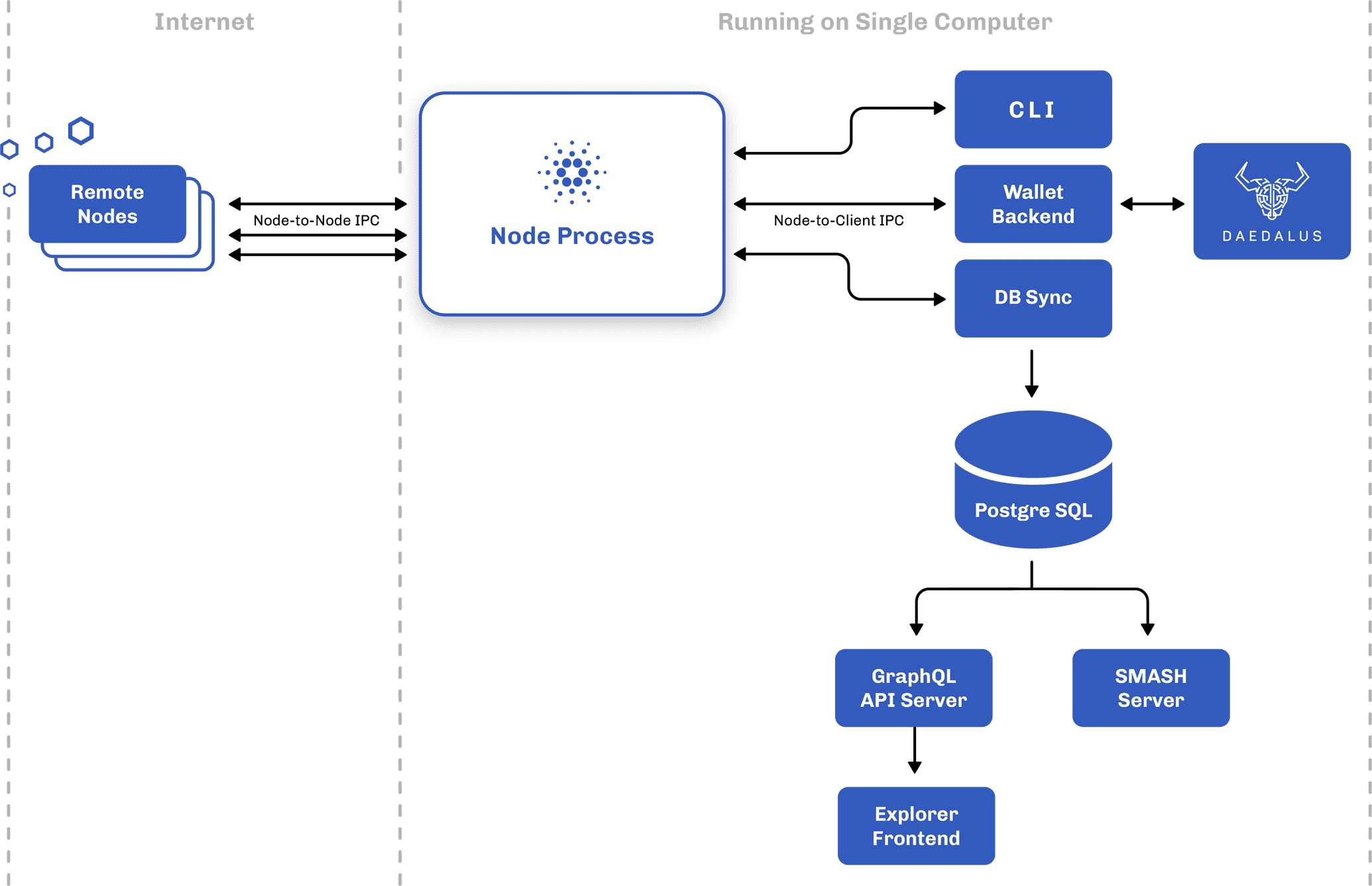 The current implementation of Cardano is highly modular. It includes the following components (different deployment use cases will use different combinations of components):

A blockchain system consists of a set of nodes distributed across a network that communicate with each other to achieve consensus about the system’s state.

Nodes are responsible for: #

You can only trust nodes run by you or your organization. This is why Daedalus runs a node in the background.

The cardano-node is the top level for the node and consists of the other subsystems, of which the most significant are consensus, ledger and networking with ancillary configuration, CLI, logging, and monitoring. Node-to-Node IPC protocol

The purpose of the node-to-node Inter-Process Communication (IPC) protocol is to allow for the exchange of blocks and transactions between nodes as part of the Ouroboros consensus algorithm.

The node-to-node protocol is a composite protocol, consisting of three ‘mini-protocols’:

These mini-protocols are multiplexed on a single long-running Transmission Control Protocol (TCP) connection between nodes. They can be run in both directions on the same TCP connection to allow for peer-to-peer (P2P) settings.

The overall protocol -and each mini-protocol- is designed for a trustless setting where both sides need to guard against Denial-of-Service (DoS) attacks. For example, each mini-protocol uses consumer-driven control flow, so a node only requests more work when it is ready, rather than having work pushed upon it.

The protocol design is modular and evolvable: version negotiation is used to agree on the set of mini-protocols to use, which allows additional or updated mini-protocols to be added over time without causing compatibility issues.

The node-to-client protocol uses the same design as the node-to-node protocol, but with a different set of mini-protocols, and using local pipes rather than TCP connections. As such, it is a relatively low-level narrow interface that exposes only what the node can provide natively. For example, the node provides access to all the raw chain data but does not provide a way to query data on the chain. The job of providing data services and more convenient higher level APIs is delegated to dedicated clients, such as cardano-db-sync and the wallet backend.

The node-to-client version of chain sync uses full blocks, rather than just block headers. This is why no separate block-fetch protocol is needed. The local-tx-submission protocol is like the node-to-node tx-submission protocol but simpler, and it returns the details of transaction validation failures. The local state query protocol provides query access to the current ledger state, which contains a lot of interesting data that is not directly reflected on the chain itself.

The node’s CLI tool is the “swiss army knife” of the system. It can do almost everything, but it is quite low level and not very convenient because it’s text-based and lacks a graphical user interface (GUI).

The CLI tool can:

Daedalus is a full node wallet that helps users to manage their ada, and can send and receive payments on the Cardano blockchain. Daedalus consists of a wallet frontend and a backend. The frontend is the graphical application that users see and interact with. The backend is a service process that monitors the state of the user’s wallet and does all the ‘heavy lifting’, such as coin selection, transaction construction, and submission. The backend interacts with a local node via the node-to-client IPC protocol, and interacts with the frontend via a HTTP API. The backend also provides a CLI that enables interaction with the wallet. The wallet backend can also be used on its own -without Daedalus- via its API. This is a convenient way for software developers to integrate Cardano with other applications and systems.

We advise that most advanced users intending to use Cardano start with Daedalus.

The cardano node stores only the blockchain itself and associated information needed to validate the blockchain. This design principle is about minimising code complexity, and reducing computational cost and resource use, to keep the node’s local interfaces as minimal as possible and to use external clients to provide a variety of convenient interfaces and extra functionality. In particular, the node does not provide a convenient query interface for historical information on the blockchain. This data service is provided by a separate component using an Structured Query Language (SQL) database.

About the eras and implementations of Cardano #

Cardano is a third-generation distributed ledger. It is based on Ouroboros, a peer-reviewed proof-of-stake (PoS) blockchain consensus algorithm that first appeared in the top research conference in cryptology worldwide (the International Association for Cryptologic Research 37th International Cryptology CXonference - Crypto 2017).

The name Cardano is the general name given to the platform, which has gone through multiple eras and implementations. These concepts need further explanation.

There are several eras within the evolution of Cardano. Each era (Byron, Shelley, Goguen, Basho, and Voltaire) refers to the rules of the ledger. For example, what transaction types and what data is stored in the ledger, or the validity and meaning of the transactions.

The evolution of the Cardano mainnet began with the Byron ledger rules (Byron era). The mainnet underwent a hard fork in late July 2020 to switch from the Byron rules to the Shelley ledger rules. Hence, this hard fork marked the beginning of the Shelley era.

Cardano’s first implementation was introduced at the start of the Cardano mainnet, back in September 2017. This implementation supported the Byron ledger rules exclusively.

A third Cardano implementation was used on the Shelley Incentivized Testnet (ITN). This system supported a significant subset of the Shelley rules, and we used it to test the economic and social dynamics of the Shelley delegation system.

This Cardano architecture overview reflects the current Cardano implementation deployed on the mainnet, not the original or ITN implementations.